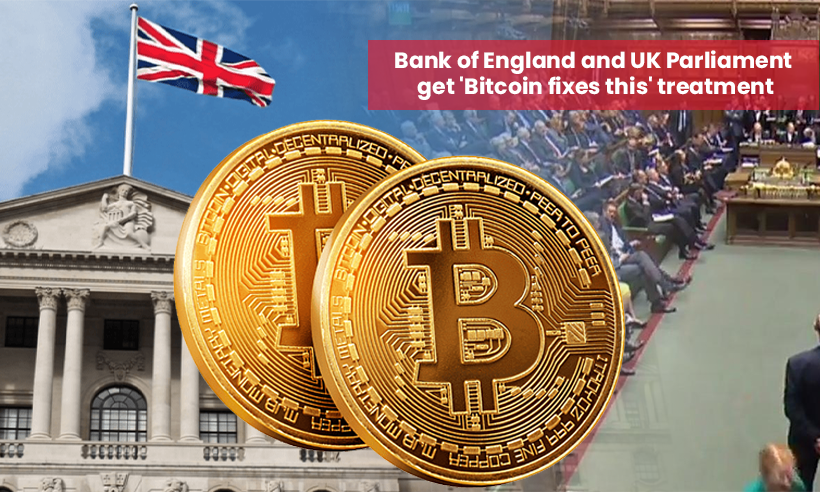 A crypto user Dominic Frisby was found to project “Bitcoin fixes this” on the exterior walls of the BoE and the UK Parliament. The crypto user aimed to oppose the current monetary policy by the Bank of England (BoE).

The Message is Now a Non-Fungible Token

An unknown person projected “Bitcoin fixes this” and other messages on the exterior walls as reported by Twitter user Dominic Frisby. The Tweet was reported last Saturday.

Unknown User Project “Bitcoin Fixes This” Message along with some other messages on the wall.  The message appeared on the front of the central bank which is encircled by the hallmark of the artist, circumambient by a red box. The message was also seen under Big Ben as well.

The interesting part of the whole incident is that the message photograph has already become a nonfungible token now.

From the latest, the Bank of England and HM Treasury have created a Central Bank Digital Currency (CBDC) Taskforce that aims to coordinate the exploration of a potential UK CBDC.

According to the discussion paper of the bank;

“The Bank has also established two external engagement groups. The CBDC Engagement Forum chaired jointly with HM Treasury, will engage senior stakeholders and gather strategic input on all non-technology aspects of CBDC. The CBDC Technology Forum will engage stakeholders and gather input on all technical aspects of CBDC from a diverse cross-section of expertise and perspectives.”

Multiple financial institutions are struggling to adopt crypto amid economic uncertainty and restrictions due to the pandemic from last year. The Bank of England has bought billions of corporate debt and government bonds till now.