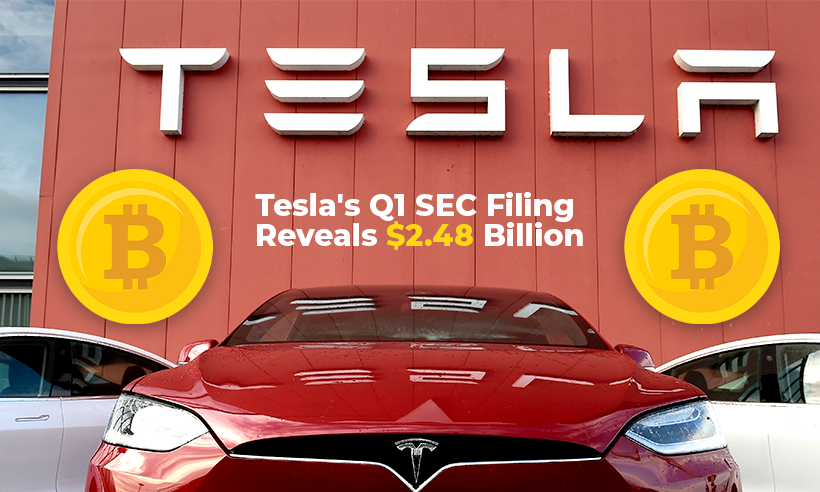 Tesla, the electric-car maker’s interest in crypto is not hidden from anyone in the sphere. The Bitcoin holdings of the crypto giant have mentioned in the SEC filings evidence worth $2.48 billion in merely the first quarter. From the latest, in the first quarter, Tesla proves its liquidity by selling 10% of its total Bitcoin holdings which calculates to $272 million.

Not long back, the news reads that the electric vehicle manufacturer initially bought $1.5 billion of Bitcoin at the beginning of the year. And now the company has opened an alternate mode of payment for the purchase of the electric car. It is worth noting that Tesla is not in a mood to convert its Bitcoin earnings into fiat. The company at present will accept payment into Bitcoin only. However, it is yet unclear whether Tesla will receive any Bitcoin for its products in the first quarter.

Bitcoin wave results in a surge of the value of Coin over 100% in the first three months of the ongoing year.  Sitting on significant unrealized gains with its crypto position, Tesla’s CEO Elon Musk said “Bitcoin sale in the first quarter was to prove that it is liquid and an alternative to cash.”

In response to David Portnoy’s criticism for Bitcoin, The CEO mentioned Bitcoin as a “pump and dump” scheme: “…I have not sold any of my Bitcoin. Tesla sold 10% of its holdings essentially to prove liquidity of Bitcoin as an alternative to holding cash on the balance sheet.”