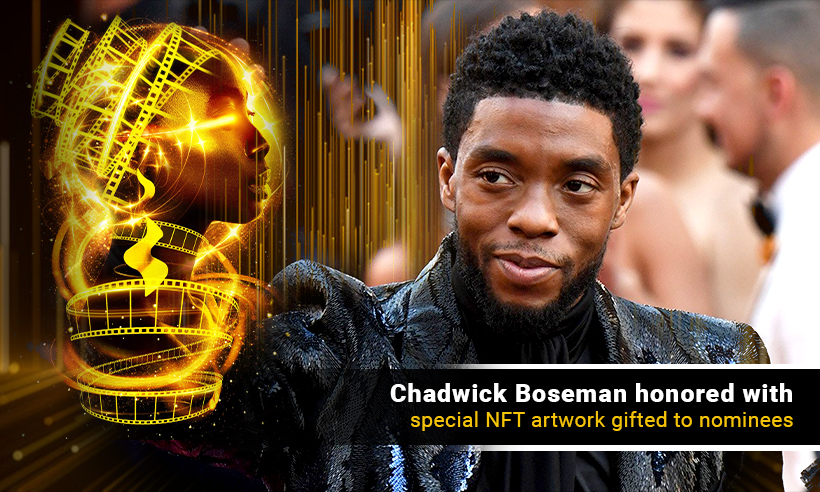 The Oscars have decided to pay their last respects and homage to the late actor Chadwick Boseman through an NFT artwork by AdVenture Media.

Although there was a social media uproar after Anthony Hopkins received the award for his work in ‘The Father’ instead of the young late actor. The launch of his NFT is seen as an attempt to mitigate the outrage and pacify the angry fans.

Boseman died of a rare cancer last August and had been reserved a posthumous nomination for his work in Netflix’s ‘Ma Rainey’s Black Bottom,’ which was strongly favored to win coming into Sunday’s ceremony.

Died at the age of 43, Boseman had already conquered multiple awards like Critics Choice Award, Golden Globe, and Screen Actors Guild award for the role, and many pundits predicted a deserved victory.

Social media claims false practices to manipulate the oscar names. The outrage is clearly seen when Hopkins’s name was announced in the show. In reality, it might be the case of proof that even organizers don’t know who’s name will be announced prior to opening the envelope. The tea leaves seemed easy to read, particularly after producers shifted the best actor win to the last award of the night.

Isaac Rudansky, the founder of AdVenture Media, stated; “This rare special edition NFT is the very first offered as a tribute to the prolific actor, a unique piece of art which is limited to just 1 edition and will never be minted again.”

Rudansky added that NFT “commemorates Chadwick’s incredible legacy while supporting the nationwide initiative to bring 10,000 colorectal screenings to underserved communities in 2021 through CCF.”

In the event, it is also mentioned that the nominees of the Academy Award would receive a one-of-a-kind digital artwork manufactured by artist Andre Oshea, redeemable by an NFT – a non-fungible token.

The artist’s NFT of the late actor, according to a press release, is a “celebration of Black creativity in cinema and art, and a salute to Boseman’s undeniable cross-generational influence as the first superhero of African descent Black Panther.”