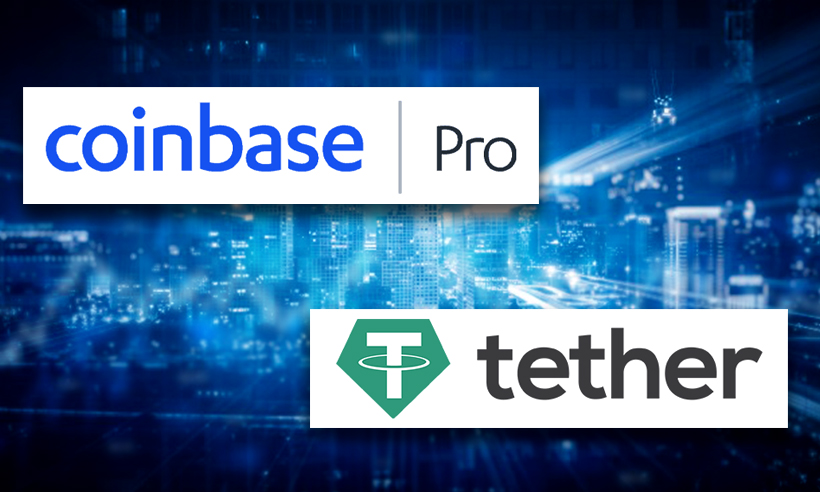 The leading cryptocurrency exchange platform Coinbase Pro has recently announced its assistance for Tether stablecoin, USDT. Along with that, the announcement mentioned that the trading of the stablecoin will begin on the crypto exchange platform from April 26, Monday in the supported jurisdictions of the company.

Coinbase Pro to List Stablecoin Tether USDT on Its Platform

In accordance with the latest official announcement made by the platform, Coinbase is only assisting ERC-20 USDT that is running on the Ethereum blockchain.

Along with this, the users of Coinbase Pro are now allowed to transfer Tether USDT into their accounts ahead of trading.

The tether can be considered in the list of the most valuable stablecoins in the world and the market capitalization of the cryptocurrency currently stands at around $50 billion.

Standing at the position of the fourth most valuable digital currency in the world, the total market capitalization of cryptocurrency has risen notably since the beginning of this year.

As mentioned by the cryptocurrency exchange in its official announcement, it said:

“Starting immediately, we will begin accepting inbound transfers of Tether (USDT) to Coinbase Pro. Trading will begin on or after 6 PM Pacific Time (PT) Monday, April 26, if liquidity conditions are met.”

In addition to this, the announcement said:

“Please note that Coinbase only supports ERC-20 USDT. Once sufficient supply of USDT is established on the platform, trading on our BTC-USDT, ETH-USDT, USDT-EUR, USDT-GBP, USDT-USD, and USDT-USDC order books will launch in three phases, post-only, limit-only, and full trading.”

Being one of the largest digital exchanges in the world, Coinbase has most recently been directly listed on NASDAQ under the ticker symbol of COIN.

As the crypto exchange made its debut in the market, the shares of the company surged by around 30%, followed by a correction that closed the price of COIN below the mark of $300.

Talking about the revenues generated by the company, it was reported that the crypto firm generated around $1.8 billion during the first quarter of the year 2021.

As the company is looking forward to expanding its product offering, the addition of several digital currencies was followed.