In a new technical analysis of SIA, we will discuss the upcoming trends that will decide its fate in the market. Siacoin is a cloud-based decentralized data storage network. It does not require any user sign-ups and is a serverless blockchain network without third parties. It is cost-effective too. SIA is the native token that powers the Siacoin blockchain ecosystem. 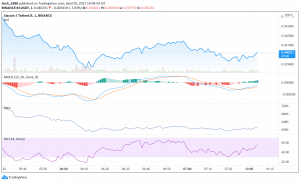 Currently, SC is trading at $0.04. The price has decreased from $0.044 since morning. Thus, the market seems to be downtick.

The MACD and signal lines are negative. Thus, the overall market momentum is bearish. However, a bullish crossover by the MACD line over the signal line has occurred. Plus, both the lines are closer to the zero line and may turn positive soon. Thus, we can expect a bearish trend reversal in some time.

The OBV indicator was declining steeply. But, for the past few minutes, it has been gradually rising. Thus, buying pressures are slowly building. This is giving further credence to the impending trend reversal shown by the MACD oscillator. Thus, we can expect the price to start rising in some time.

The RSI indicator faced rejection at 43% and is rising steadily thereafter. It is currently at 61%. Thus, buying pressures are high. The RSI indicator is implying that the bulls are gaining strength. In conjunction with the other oscillators, it is safe to conclude that we can expect a bullish trend to set in soon.

As per technical analysis, currently, the price is below the Fibonacci pivot point of $0.042. As the indicators have shown positive signals, we can expect the price to surpass the pivot point and break out of the first resistance level of $0.044.